Melanotan II is a peptide first developed and synthesized by researchers at the University of Arizona as a possible defence against skin cancer. Melanotan II allegedly produces a natural tan which helps protect against UV exposure and subsequently would lower the risk of skin cancer.

The body’s naturally occurring hormone α-MSH causes melanogenesis, a process by which the skin’s pigment cells (melanocytes) produce the skin’s pigment (melanin). They tested to see if administering this endogenous hormone to the body directly could be an effective method to cause sunless tanning. What they found was that while it appeared to work, natural α-MSH had too short a half life in the body to be practical as a therapeutic drug.

So they decided to find a more potent and stable alternative, one that would be more practical. What they found was Melanotan II. 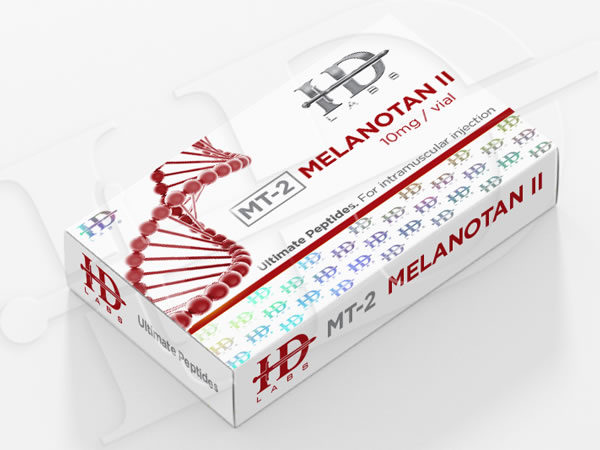 Melanotan II is part of a class of peptide hormones known as Melanocortins. Melanotan II (MTII) also can have the side effect of increasing libido in Men and Women. However unlike erectile dysfunction compounds, MT-II works at a neural level on the brain to increase libido, so as a result it works both on women as well as men.

A pilot Phase I clinical trial conducted on three males using MT-2 by the College of Medicine, Pharmacology Department, University of Arizona in Tucson, Arizona published in 1996 reported that, “MT-2” has tanning activity in humans given only 5 low doses every other day by subcutaneous injection. (Mild side effects reported included slight nausea and increased spontaneous penile erections.

After synthesizing and screening hundreds of molecules, the researchers headed by Dr. Victor Hruby, found a peptide that after trials and testing seemed to not only be safe but also approximately 1,000 times more potent than natural α-MSH. They dubbed this new peptide Melanotan-II (MT-2). Since their discovery, numerous studies dating back to the mid-1980s have shown no obvious toxic effects of Melanotan-2. Because skin cancer (melanoma) today is a major health concern, Melanotan II (MT-2) is expected to be used as a drug to combat it. MT-2 will do this by stimulating the body’s natural tanning mechanism to create a tan without first needing exposure to harmful levels of UV radiation. This in turn will reduce the potential for skin damage that can eventually lead to skin cancer.

It has been described to have super potent melanotropic activity in vitro. Its effect on tanning, like the effect of its similar peptide Melanotan I, was also investigated (Dorr et al. 1996).

The effects of Melanotan II on the diet and food intake of the laboratory mice have also been investigated. It has been demonstrated that the central melanocortin (MC) has been activated by Melanotan II when fed and induced in the mice. The six-day treatment of MT-2 has shown that Melanotan II actually reduced the body weight and the adipose tissue in the viscera of the mice and suppressed the caloric intake of the organism. This has implications in clinical applications of the possible treatment to reduce carbohydrate or calorie intake especially for the overweight and the obese. Furthermore, the same study has also demonstrated that there was a sustained increase in the available oxygen consumption in obese animals. Melanotan II (MT-2) also helped reduced the level of serum insulin and the cholesterol levels when compared with the control treatments. Furthermore, it has been suggested that Melanotan actually lowers the level of acetylcholine A caboxylase expression and even prevented the reduction of carnitine and palmitoltransferase I mRNA in muscle-type tissues by pair-feeding in the muscles of the obese rats. Moreover, the Melanotan II actually increased the fat catabolism in the muscles and even improved the cholesterol metabolism (Li et al. 2004).

Other chemical activities of Melanotan II (MT-2) when tested in vivo are inhibition of feeding, suppression of NPY orexigenic action and reduction in basal insulinaemia (Raposinho et al. 2003).