Human chorionic gonadotropin is a glycoprotein composed of 244 amino acids with a molecular mass of 36.7 kDa. 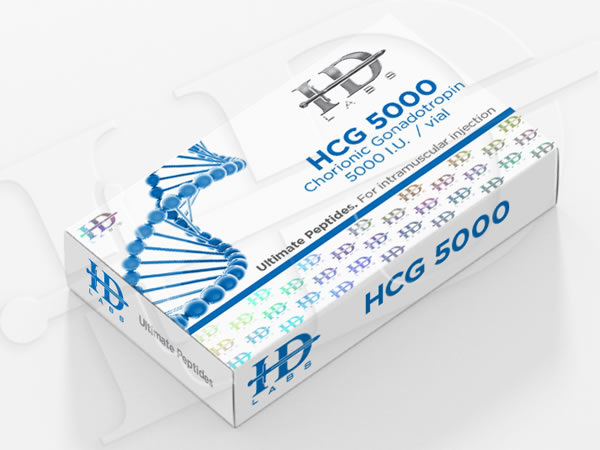 Human chorionic gonadotropin interacts with the LHCG receptor and promotes the maintenance of the corpus luteum during the beginning of pregnancy, causing it to secrete the hormone progesterone. Progesterone enriches the uterus with a thick lining of blood vessels and capillaries so that it can sustain the growing fetus. Due to its highly-negative charge, HCG may repel the immune cells of the mother, protecting the fetus during the first trimester. It has also been hypothesized that HCG may be a placental link for the development of local maternal immunotolerance. For example, hCG-treated endometrial cells induce an increase in T cell apoptosis (dissolution of T-cells). These results suggest that HCG may be a link in the development of peritrophoblastic immune tolerance, and may facilitate the trophoblast invasion, which is known to expedite fetal development in the endometrium. It has also been suggested that HCG levels are linked to the severity of morning sickness in pregnant women. Because of its similarity to LH, HCG can also be used clinically to induce ovulation in the ovaries as well as testosterone production in the testes. As the most abundant biological source is women who are presently pregnant, some organizations collect urine from pregnant women to extract HCG for use in fertility treatment.

Like other gonadotropins, HCG can be extracted from urine or by genetic modification. Pregnyl, Follutein, Profasi, Choragon and Novarel use the former method, derived from the urine of pregnant women. Ovidrel, on the other hand, is a product of recombinant DNA. HCG is produced from the syncytiotrophoblast cell layer.

Levels of HCG may be measured in the blood or urine. Most commonly, this is done as a pregnancy test, intended to indicate the presence or absence of an implanted embryo. Testing for HCG may also be done when diagnosing or monitoring germ cell tumors and gestational trophoblastic disease.

Most tests employ a monoclonal antibody, which is specific to the β-subunit of HCG (β-hCG). This procedure is employed to ensure that tests do not make false positives by confusing HCG with LH and FSH. (The latter two are always present at varying levels in the body, whereas the presence of HCG almost always indicates pregnancy.)

The following is a list of serum HCG levels. (LMP is the last menstrual period.) The levels grow exponentially after conception and implantation.

Human chorionic gonadotropin can be used as a tumor marker, as its β subunit is secreted by some cancers including seminoma, choriocarcinoma, germ cell tumors, hydatidiform mole formation, teratoma with elements of choriocarcinoma, and islet cell tumor. For this reason a positive result in males can be a test for testicular cancer. The normal range for men is between 0-5 mIU/mL. Combined with alpha-fetoprotein, β-HCG is an excellent tumor marker for the monitoring of germ cell tumors.

Human chorionic gonadotropin is extensively used parenterally as an ovulation inducer in lieu of luteinizing hormone. In the presence of one or more mature ovarian follicles, ovulation can be triggered by the administration of HCG. As ovulation will happen between 38 and 40 hours after a single HCG injection, procedures can be scheduled to take advantage of this time sequence, such as intrauterine insemination or sexual intercourse. Also, patients that undergo IVF, in general, receive HCG to trigger the ovulation process, but have an oocyte retrieval performed at about 34 to 36 hours after injection by, a few hours before the eggs actually would be released from the ovary.

As HCG supports the corpus luteum, administration of HCG is used in certain circumstances to enhance the production of progesterone.

In the male, HCG injections are used to stimulate the leydig cells to synthesize testosterone. The intratesticular testosterone is necessary for spermatogenesis from the sertoli cells. Typical uses for HCG in men include hypogonadism and fertility treatment.

During first few months of pregnancy, the transmission of HIV-1 from woman to fetus is extremely rare. It has been suggested that this is due to the high concentration of HCG, and that the beta-subunit of this protein is active against HIV-1. - See more at: http://www.synthesispeptides.com/hcg-5000-iu-human-chorionic-gonadotropin/#sthash.ooLD5dKf.dpuf

A controversial usage of HCG is as an adjunct to the British endocrinologist Albert T. W. Simeons’ ultra-low-calorie weight-loss diet (less than 500 calories). Simeons, while studying pregnant women in India on a calorie-deficient diet, and “fat boys” with pituitary problems (Frölich’s syndrome) treated with low-dose hCG, claimed that both lost fat rather than lean (muscle) tissue. He reasoned that HCG must be programming the hypothalamus to do this in the former cases in order to protect the developing fetus by promoting mobilization and consumption of abnormal, excessive adipose deposits. Simeons later published a book entitled Pounds and Inches, designed to combat obesity. Simeons, practicing at Salvator Mundi International Hospital in Rome, Italy, recommended low-dose daily hCG injections (125 IU) in combination with a customized ultra-low-calorie (500 cal/day, high-protein, low-carbohydrate/fat) diet loss of adipose tissue without loss of lean tissue. After Simeons’ death, the diet started to spread to specialized centers and via popularization by individuals, such as the controversial author Kevin Trudeau, famous for promotion of alternative therapies and treatments.

The controversy proceeds from warnings by the Journal of the American Medical Association and the American Journal of Clinical Nutrition that HCG is neither safe nor effective as a weight-loss aid.

A meta-analysis found that studies supporting hCG for weight loss were of poor methodological quality and concluded that “there is no scientific evidence that HCG is effective in the treatment of obesity; it does not bring about weight-loss or fat-redistribution, nor does it reduce hunger or induce a feeling of well-being”.