GHRP-6 (Growth Hormone Releasing Peptide – 6) is a true HGH secretagogue. It is a 28-amino-acid peptide that signals the human body to begin secreting growth-hormone which means it stimulates the body’s own secretion of HGH. The Growth Hormone secreted by the body then causes the liver to secrete the highly anabolic hormone known as IGF-1. Both Growth Hormone as well as IGF-1 also has several beneficial effects on collagen and bone tissue growth, and it would be expected that by using GHRP-6, users would experience the full spectrum of benefits typically seen with the use of GH and possibly the concurrent use of both GH and IGF-1. 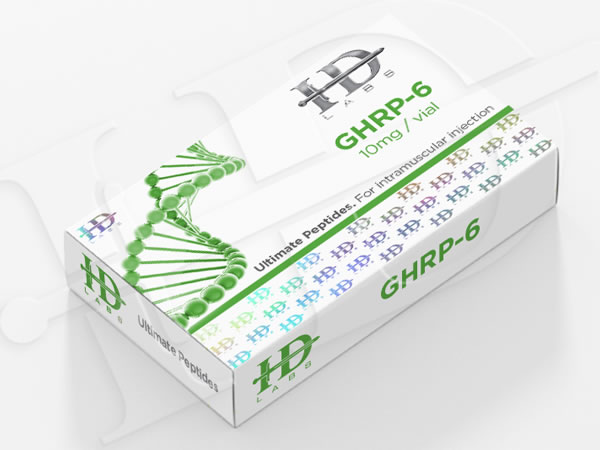 Human Growth Hormone has been shown in studies to promote lean body mass and reduces adiposity (fat). GHRP-6 also has a protective effect on the liver and an anti-inflammatory effect. These are paramount attributes for experiments involving muscle synthesis and recovery. Bodybuilders and athletes have recently started using GHRP-6 in an effort to build more muscle and burn more fat. Typically, it is used on (or instead of) a cycle of anabolic steroids. However, some of the more creative users of this compound have been including it in their Post Cycle Therapy instead of GH, and even more have been cycling GHRP-6 in the off weeks from their IGF/GH cycles, in an effort to kick-start their body into producing their own natural GH & IGF, but at the same time getting the same results as if they remained on the GH/IGF cycle.

GHRP-6 (Growth Hormone Releasing Peptide – 6) is a hexapeptide with a chain comprised of 6 amino acids. This special sequence is considered to provide a signal to the body to begin secreting Growth Hormone (GH) release while also blocking Somatostatin, a hormone that inhibits Growth Hormone release. Research studies have shown that GHRP-6 stimulation of Growth Hormone has host of beneficial effects such as decreased body fat, increased muscle, and increased strength and stamina so maximizing the production and secretion can be a great addition to improved animal physical shape. Increased amounts of Growth Hormone then can cause the liver to secrete the hormone IGF-1 which has also been implicated in improving the animal body’s ability to burn fat and build muscle. Clinical cases have shown that the use of GHRP-6 was associated with increased muscle mass and a reduction of body fat.

Growth hormone releasing peptide (GHRP-6, His-D-Trp-Ala-Trp-D-Phe-Lys-NH2) is a synthetic analog of naturally secreted GHRH which induces the release of growth hormone in a specific and dose-related manner through mechanisms and a point of action that are mostly unknown but different from that of GHRH (Popovic et al. 1995). However, other investigations reported that GHRP-6 is more efficient than GHRH itself in monkeys and performs synergistically when combined or applied together. The chemical structure and properties of the said analog is shown below:

This compound has been one of the most thoroughly studied and is believed to be acting naturally on both pituitary and hypothalamic sites (Fairhall et al. 1995). This has been demonstrated in the primary pituitary cells of rats in a time-dependent and dose-dependent manner. The studies have shown that the concentrations of the GHRP-6 needed for the half-maximal and maximal stimulation were 7 x 10(-9) and 10(-7) M, respectively. In another study of Fairhall et al. (1995), they concluded that the major target of the GHRP-6 in vivo is the hypothalamus after observing that the GH release induced by the central GHRP-6 administration in guinea pigs was inhibited by the central action of somatostatin. Furthermore, an inhibition by somatostatin with the activated GRF neurons, induced by GHRP-6, was observed via receptors known to be located on or near the GRF themselves. However, it was also observed that GHRP-6 had no effect on the intracellular cAMP levels unlike that of GHRP-2. This particular experiment further indicated that GHRP-6 is effectively stimulating GH release from somatotrophs through different receptors, the mechanisms of which are not yet known (Chan et al. 1989). However, some researchers suggest that action and efficiency of growth hormone is dependent on the physical condition of the experimental unit. In humans for example, GH secretion decreases with obesity. This is contrary in the case of the GHRP-6 which showed increased (almost twice that of GHRP) GH responses when administered in obese patients (Cordido et al. 1993). Though obesity has shown affecting the efficiency of the hormone, it was also suggested that GHRP-6’s effects, at least at the dose-dependent manners, were found to be sex- and age-independent without being affected by the noadregenic pathways using the a2 adrenergic receptors (Penalva et al. 2008).